Posted on June 19, 2014 by wildwahinepaddler

Just wow!!!!   It was a spectacularly beautiful day here on Maui today!  I paddled down to my favorite spot and was immediately sitting between two turtles!  Some other paddlers were there too and we watched the turtle in the photo shooting it’s head in and out of the water!  I told one guy that the turtle was “Torpedo head”…… And just as the words left my mouth……. The turtle jutted it’s head out of the water and stunned the guy who was watching.  He looked at me and said,”well I can see why you named it that!”  Torpedo head put on quite a show!   Then I sat in a turtle triangle and then was surrounded by four turtles…….. And then two more joined us!   There were about thirteen turtles in all!  Paddling back was really nice too and it stayed so glassy!  My swim was great too.  What a spectacular day! 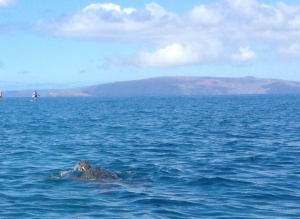