Posted on September 3, 2014 by wildwahinepaddler

I was so excited to go out paddling today!  Those were two long weeks without paddling.  When I arrived at the beach…..it seemed like the wind was coming up already.  I decided to go out anyway and paddle north into the wind.  I paddled down to Kalama Park and as soon as I got there, the wind backed off and the ocean got glassy!  I didn’t see any turtles down there so I turned and paddled south.  Just as I was passing Kam II, I ran into a paddling friend who had just come out.  Then two other friends paddled up for a paddlers “pow wow”!  The two other friends had been all the way down to Ulua Beach in Wailea and got caught in the wind.  They were huffing and puffing from all the effort it took to paddle back from Wailea!  My other friend and I decided to paddle down to the boat ramp.  It was incredibly nice and calm!  We were the only people out at the boat ramp and two turtles surfaced in front of us!  One of the turtles was very friendly, so I managed to get a good shot of it (above photo).  The other one dove down under my friend.  Then my friend spotted a turtle farther out and I spotted one farther south.  I hurried to paddle over to the turtle and it ended up being two turtles!  I got two more photos and then one turtle disappeared, and the other one dove down and was swimming under my board.  Five turtles for today….. and I’ll gladly take it!  The turtles have been scarce lately since the hurricanes, so maybe they will start coming back to the boat ramp now.  We saw the red snorkel tour boat moving in our direction so we decided to head back.  It was perfect conditions all the way back too!  By the time I rinsed my board and hoisted it up on my racks….. the wind was starting up again.  First, the wind blew from the north, then it changed to the south and then north again.  I swam in choppy conditions but it felt great to get wet!  I hope it’s nice tomorrow morning too! 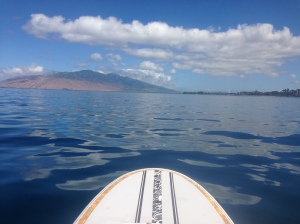 I have been happily living on Maui for the past twenty-four years. I have been stand up paddling for over five years. I am married to Bob; have three grown children, five grandchildren,( two grandsons and three grand daughters.) I live in Kihei, on the South shore of Maui, right up the street from Kamaole Beach Park I. I paddle from Kam I almost every morning. I love living the island life and I love sharing my paddling adventures! Come join me! Maui No Ka Oi!
View all posts by wildwahinepaddler →
This entry was posted in Uncategorized. Bookmark the permalink.
Loading Comments...
%d bloggers like this: