Posted on October 5, 2014 by wildwahinepaddler

Wow…..that was a long stretch to go without paddling…..nine days!  Just when I was getting several perfect turtle days in a row, another south swell rolled in with surge and high tides.  I’m not sure I have ever seen the red flags up for so many consecutive days!  The tide was coming in so there was some shore break, but I waited and went out.  It was a beautiful day!  The ocean not as calm as I like it, but at least I was finally out there!  I paddled south down to Kam III and turned around.  Paddling north I ran into two paddling friends so we chatted briefly and then turned and paddled south again.  Suddenly I saw a turtle and yelled, “It’s a buddy!”  and turned around and paddled with it all the way down to Kam I.  It surfaced twice and I caught a photo of it!  That turtle made my day.  I decided to head in an go for my swim.  The water visibility isn’t very good because of the swell, but I was able to see the bottom.  I was happy to see little fish swimming beneath me!  The wind never came up and people were still out paddling at noon.  I hope it’s nice tomorrow!  That was way too many days to be out of the ocean……. 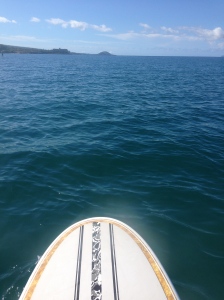 Happy just to be out!