Posted on September 12, 2015 by wildwahinepaddler

WOW……. I can’t believe it!  I actually paddled down to the boat ramp three days in a row!  It was another beautiful day and the conditions were perfect.  Apparently what’s left of Hurricane Jimena is passing by and thats why the wind is blowing from the south and bringing VOG in from the Big Island.  It’s also causing a bit of a swell but it’s manageble and the water is SO warm and very clear!  Just a perfect day at the beach.  Yesterday we got a short bit of rain too but it didn’t last.  It was a pleasure paddling down to the boat ramp!  Only one turtle visited me and that is the photo of it above.  It surfaced twice and then dove down.  I don’t know where most of my turtles are hiding out lately…….. It seems that maybe the weeks of crazy ocean conditions have disturbed them.  I paddled back in nice conditions too… 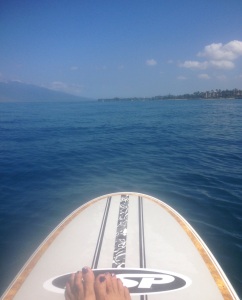 when I got back the wind still had not come up!  As I paddled in….. Two turtles appeared but I couldn’t hang around because I was too close to shore and in the impact zone.  It was good to see two more turtles though!  I had to get in quick before one of the waves caught me.  During my swim I had to swim out past where the occasional wave was breaking.  The water is so warm right now!   It was just a gorgeous but hot day……. Fall is definitely in the air!  Can I make it four days in a row paddling tomorrow?  Let’s hope so!