Posted on November 13, 2015 by wildwahinepaddler 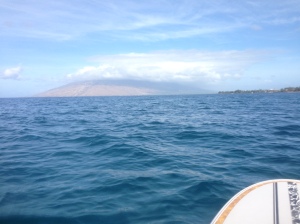 I keep pinching myself to make sure it is real having five great paddling days in a row!  It’s real! The morning stsrted out a bit windy……. blowing from the East.  I decided to paddle down to Kam 2 and see what the wind was doing.  The wind was blowing off and on, so the ocean surface wasn’t calm.  I ran into a paddling friend so we decided to go to the boat ramp.  Then we decided we didn’t trust the wind and paddled back to Kam 2.  Finally the wind backed off and it got really nice!  It was so nice paddling back.  I decided to swim while it was so nice.  As soon as I swam out….I spotted a big crab on the bottom!  I’m not sure if it was threatened by me but it had both claws extended out like it was ready for a fight!  I followed it around for a little while and then swam south towards the reef.  The wster was so clear today!  I saw lots of fish including Moorish Idols and a little baby Puffer fish.  It was such a nice day!  When I came in from swimming…… A paddling friend sent me some photos he had taken yesterday over at Hookipa Beach Park.  Turtles!  Apparently the turtles have been coming up on the beach to lay in the sun!  What a treat to get those photos…… 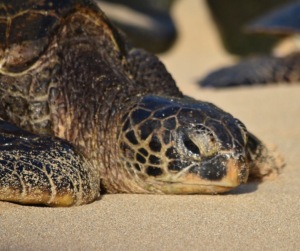 I have been happily living on Maui for the past twenty-four years. I have been stand up paddling for over five years. I am married to Bob; have three grown children, five grandchildren,( two grandsons and three grand daughters.) I live in Kihei, on the South shore of Maui, right up the street from Kamaole Beach Park I. I paddle from Kam I almost every morning. I love living the island life and I love sharing my paddling adventures! Come join me! Maui No Ka Oi!
View all posts by wildwahinepaddler →
This entry was posted in women sharing stand up paddling adventures. Bookmark the permalink.