Posted on February 7, 2016 by wildwahinepaddler

After several days of less than optimal paddling conditions…….. finally the swell backs off just in time for the wind to pick up!  I contemplated going out on my board anyway but it really isn’t fun to me to be tossed around by choppy conditions.  I watched it for a while and the wind was not backing off one bit.  The winds are supposed to change direction later this afternoon……. which is good since the vog has crept in over Maui again.  I could not see the island of Lanai at all today because of the vog.  I hope the wind blows it away soon!  I decided to go swimming despite the wind and chop and I’m so glad I did!   The water was so clear!  I swam down to the reef and watched the fish and then on my way back….. I ran across a turtle!  It was a big healthy turtle too.  It swam with me for a while, right under me!  Then it came up towards me a couple of times so I gave it a rub……… It was so friendly.  Then something happened that I had not experienced before….. another turtle appeared swimming in our direction!  I wondered what the turtles would do.  They saw each other and moved towards each other……and …practically touched snouts!  Then they moved away from each other and I swam back with the other turtle.   Wow… My day was made!   What a great swim with the turtles! 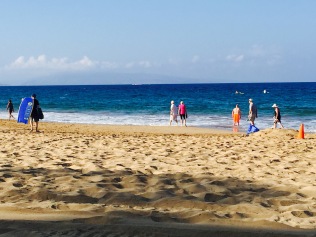 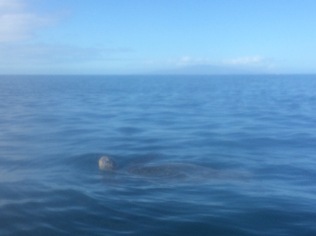