Posted on February 14, 2016 by wildwahinepaddler

Well it was finally a nice paddling day!  I had to go down early and drop my beach stuff off because the road was going to be closed for the Whale Day Parade.  I walked back down just in time to see the last half of the parade.  It was better than I expected!  There were Roller Derby women skaters dressed in assorted colors……Girl Scouts tossing out candy from a float….. A woman on stilts dressed in rainbow attire and carrying a rainbow umbrella….. Decorated cars….. A giant whale being carried down the road….. a float full of “Mermaids” of every age and size….. And a marching band from one of the schools….. As soon as it passed I could get to the beach!  A wind had started to kick up by then so I didn’t want to waste any time getting out on my board.  It was just a beautiful day and the swell was gone!  I paddled down to Kam 3 and then didn’t trust the windy conditions so I turned around and paddled north to Charley Young beach and then back to Kam 1.  It was so good to just be out on the water!  My swim was nice too even though the visibility is still messed up from the recent swell activity.  I swam down to the reef but the water was still pretty cloudy.  I did manage to see some fish though.   I was almost back when a turtle showed up close to shore!  Of course I couldn’t resist swimming longer so I could swim with the turtle!  I swam with it almost down to Charley Young beach and since the water was even less clear in that direction…… the turtle almost ran into me TWICE!  It was great to swim again with the turtles!  I hope the water is clearer tomorrow and the wind cooperates for a nice paddling day on Valentines Day! 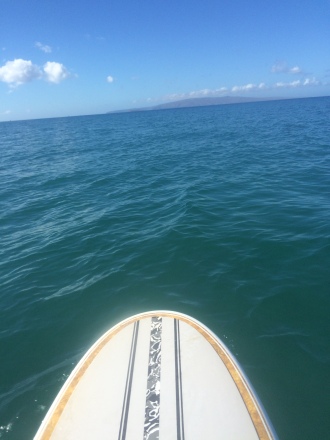