Posted on February 21, 2016 by wildwahinepaddler

It was another really nice day today!  Not quite as calm as yesterday but still pretty nice.   I paddled down to the boat ramp and one of my paddling friends was already there so we chatted for a few minutes.  There were a bunch of people out in kayaks too.   I immediately spotted three turtles bobbing on the waters surface…..so I headed over to them.   Then two of the turtles disappeared and then four turtles appeared again!  We were surrounded by turtles!  Then two more turtles popped up!  On the way back we saw a whale splashing around and another turtle at Kam 3…… That made eleven turtles for the day!  Then the wind started to come up and the water got choppy so I headed back to Kam 1.  When I went for my swim I wanted to go visit the turtle haven…. But today the sand was kicked up down there and I don’t like swimming around the rocks with poor visibility! Maybe another day…….. 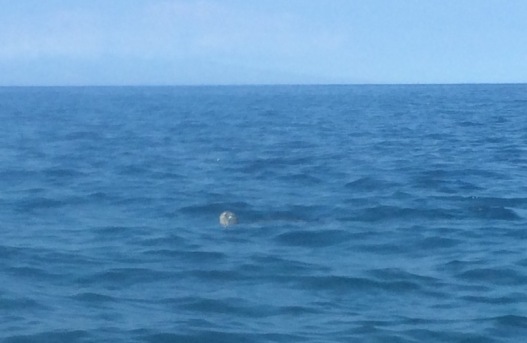 I have been happily living on Maui for the past twenty-four years. I have been stand up paddling for over five years. I am married to Bob; have three grown children, five grandchildren,( two grandsons and three grand daughters.) I live in Kihei, on the South shore of Maui, right up the street from Kamaole Beach Park I. I paddle from Kam I almost every morning. I love living the island life and I love sharing my paddling adventures! Come join me! Maui No Ka Oi!
View all posts by wildwahinepaddler →
This entry was posted in women sharing stand up paddling adventures. Bookmark the permalink.
Loading Comments...
Comment
×
%d bloggers like this: