Posted on August 19, 2016 by wildwahinepaddler

What an amazing day!  I’ve seriously forgotten how many days I’ve been out paddling in a row….. and that’s a good sign.  It actually seemed like it might be windy this morning…. But the wind backed off nicely.  Down at the boat ramp I had eleven turtles!  I sat between turtles ….. Ended up in the middle of five turtles……and had so many turtles coming up to visit me!  I got so many photos too.  Just one other person paddled by and she was annoying! I’m sitting in between five turtles and from a distance she yells “Are those turtles?”  and then  yelling again “Are you sitting in the middle of turtles?”.   I really didn’t want to answer her and break the spell of the turtles!  That didn’t stop her from interfering though….. She came over and proceeded to get in the way of my picture taking. Oh well!  Luckily she moved on but after counting eleven turtles I decided to paddle back. But before I left a strange thing happened ….. A bird flew onto my head and then landed on my board for a few minutes!  I didn’t make any quick moves and got a photo of it!  That has never happened before!  When I passed Kam 3, another turtle surfaced! Then down by the rocks at Kam 2 I spotted two more turtles and then one swam under me as I paddled in at Kam 1.  That made fifteen turtles total for today and one bird!  Crazy.  The conditions stayed nice while I swam too!   The wind didn’t start coming in until 11:00 a.m. either so it was just a perfect morning! 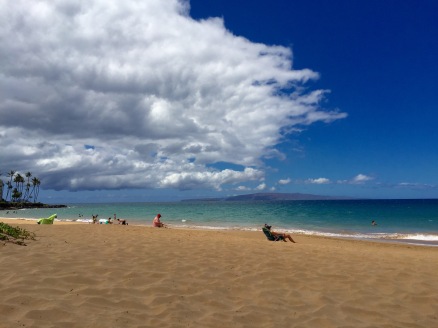 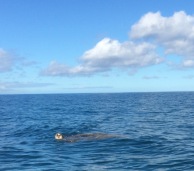 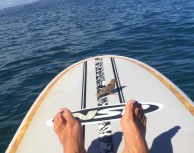 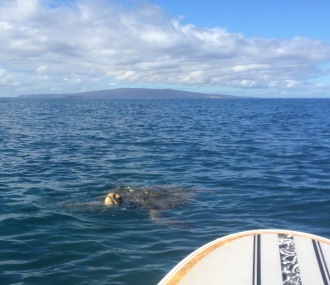 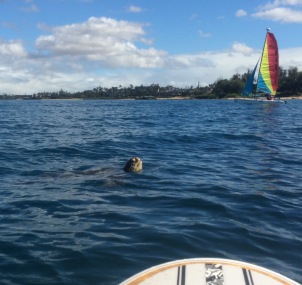