Posted on November 10, 2016 by wildwahinepaddler

It was a lovely colorful sunrise this morning!  It didn’t last very long so I’m glad I got photos.  It was a much nicer day today too….. not much wind and sunny…. yet the ocean wasn’t calm.   The tide was extra high and there was some sporadic shore break.  The ocean was not begging me to paddle!  I instead chose to swim.  It was pretty nice actually.  The water was not as clear as yesterday though.  Later in the morning I was preparing to leave the beach and I saw something very dark cruising the shore out about twenty to thirty yards.  I knew it wasn’t a turtle because it was easily ten feet long and moving much faster than a cruising turtle! I wasn’t sure what to make of it but a beach friend was about to go out swimming so I rushed down to the shoreline to alert him.  He couldn’t see it!  I watched it cruising along heading north.  He went swimming anyway…. in that direction!  Later on one of my paddling friends called me excitedly…… she had come face to face with a shark down outside of Kam 2 while swimming!  This happened right around the time I saw the dark shadow cruising past Kam 1!  She estimated the shark to be around ten feet just like I estimated!  Wow.  She said the lifeguards blew it off when she reported it! How crazy! 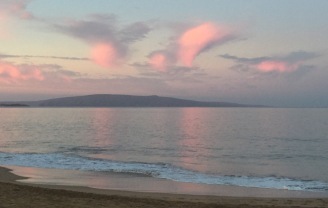 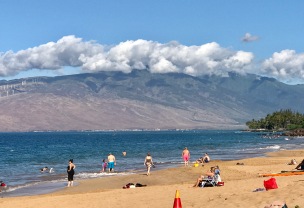