Wow!  What a day!  I’m getting so spoiled with all these turtles!  The sun finally came out for the morning and after walking the beach, I went swimming.  I immediately encountered a big turtle!  It was swimming north so I did too.  Then I turned around and headed south down to the coral.  The turtle I have named “Peekaboo” was resting in her protective spot as usual.  I swam around the area waiting to see if she wanted to come up.  I saw a bunch of fish and a big lobster!  I have never seen a lobster there before.  Then the turtle started to surface!  I just treaded water and took photos  while she swam all around me.  This turtle doesn’t hesitate to come right in my face and look at me!  Then she dove down to her secret spot again.  She came up two more times! Then another turtle zipped right under me so I followed that one.  Then more turtles started to come around too!  It was quite a turtle morning!  Then I went Paddling too.  I paddled down into Kam 2 and then came back and hung around at the point.  Several turtles ( even two very small babies) surfaced and I got a few photos but too many people were there in my way.  The wind started to blow and the water got choppy so I left.  It was a pretty magical turtle day! 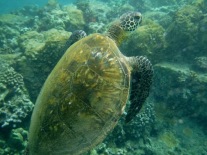 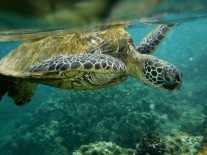 I have been happily living on Maui for the past twenty-four years. I have been stand up paddling for over five years. I am married to Bob; have three grown children, five grandchildren,( two grandsons and three grand daughters.) I live in Kihei, on the South shore of Maui, right up the street from Kamaole Beach Park I. I paddle from Kam I almost every morning. I love living the island life and I love sharing my paddling adventures! Come join me! Maui No Ka Oi!
View all posts by wildwahinepaddler →
This entry was posted in women sharing stand up paddling adventures. Bookmark the permalink.
%d bloggers like this: