Posted on August 31, 2016 by wildwahinepaddler

So the wind blew in by 8:30 a.m. and after watching it for awhile…..I could see that it would be a swim day.   It was really beautiful though!  I swam north into the wind and it was a workout.  I made it down to almost the end of Charley Young beach and then turned around.  I was enjoying being tossed by wind waves on the way back until suddenly a turtle appeared under me.  Of course I turned around again……and swam with the turtle down to Charley Young beach!  Right at the end….. the turtle surfaced for air and when I came up…. Two tourists were watching us.  The man said “is that your buddy”….. To which I replied “it’s one of them!”…….  I do love swimming with the Honu! 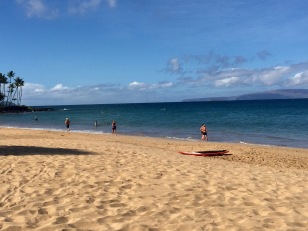